Recent legislation has tightened the rules governing asbestos for health and safety, although oddly it is still not illegal to build with asbestos containing material.

Asbestos has been banned as a building material in most countries in the world due to evidence that emerged from research that revealed links with certain forms of lung disease, mainly mesothelioma and asbestosis. The insidious nature of asbestos related diseases is that a latency period of in excess of thirty years can occur before the symptoms emerge and a diagnosis.

Classified as carcinogenic, asbestos fibres can enter the respiratory system via inhalation and often get lodged in the lungs which is the cause and start of the problem.

Years to look out for: Asbestos was used in buildings from the early 1900’sup until the mid 1980’s*1. EQC state on their website: “Asbestos was in widespread use in New Zealand houses and commercial buildings from the 1940s to the 1990s.” nzsafety.co.nz. Sheri Suckling: “Asbestos was once a popular choice for insulating against heat or noise, and older buildings (built before the 1980s) are highly likely to have asbestos-containing materials on site.” Ministry of Health; www.health.govt.nz “Asbestos was mainly imported and used before the 1980s. Once the health risks of asbestos were known, its use was gradually stopped, and other materials used instead. However, products and appliances with asbestos content may still be around, particularly in homes built before 1984.”

The above is confusing, having two government departments providing different information on the subject matter!

What to do if your property contains asbestos building material?

The priority to answering this question is largely around location of the asbestos and in relation to human exposure and financial ability to remove or treat it by encapsulation.

Wall flat sheet cladding: If the material is in sound, non-friable condition (will not crumble under pressure using forefinger and thumb) and has not been painted, apply two coats of an approved paint after gently hosing down the surfaces. This painting “encapsulates” the asbestos fibres and as such renders them inert and safe all the time they remain encapsulated. Do not sand down as part of the painting preparation: this will release asbestos fibres into the air.

It is not uncommon for gable roof ends to have Hardies “Shadowline”. A decorative asbestos fibre cement wall cladding. Popular during the 1960′s and 1970′s. Also common was asbestos weatherboard which could be purchased either plain or textured. 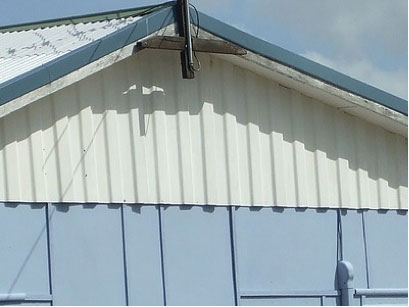 “Shadowline” used in a gable end. 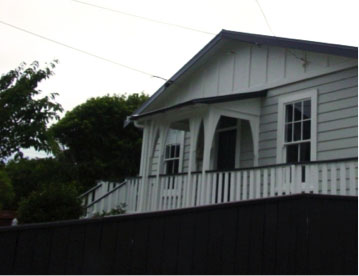 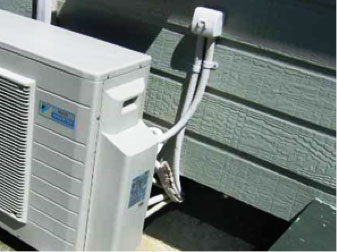 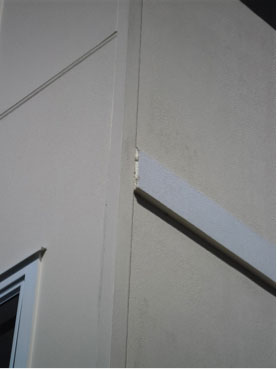 Wall flat sheet cladding: If the material has cracked sheets, broken sheets and is generally in a poor state of repair; engage approved contractors to have it removed safely.
Roof cladding: The main profiles of asbestos cement sheeting would be corrugated and either “Super 6” (corrugations being 6 inches apart (150mm) and common in commercial roofs) or standard corrugated. Firstly we must appreciate that asbestos is a very long life building material which required little or no maintenance hence its popularity! BEWARE, this material gets brittle with age and for anyone to fall through an asbestos clad roof and survive would be scarred badly. This is due to the zig zag, jagged sharp edges caused by the failing roof cladding. Buildsure and Associates will not physically go up on an asbestos roof; that is how dangerous we think it is in terms of possible failure and subsequent injury risk! 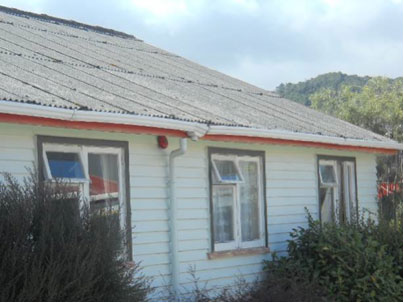 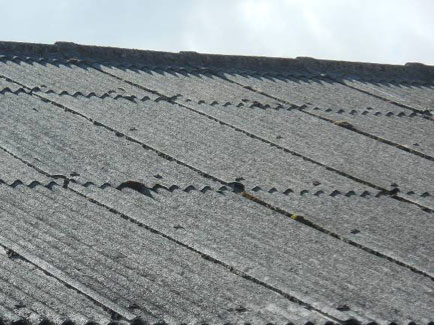 Standard corrugated roof cladding, in poor condition and “friable”. Recommended that it be removed and the internal void decontaminated by qualified asbestos removers.

If the material is in sound, non-friable condition (will not crumble under pressure using forefinger and thumb) and has not been painted, apply two coats of an approved paint after gently hosing down the surfaces. This “encapsulates” the asbestos fibres and as such renders them inert all the time they remain encapsulated. Do not sand down as part of the painting preparation: this will release asbestos fibres into the air. Even after encapsulation by paint, asbestos corrugated roof cladding fibres are released*2. The encapsulation however reduces considerably the amount of fibres released. The external environment becomes the natural depository for the fibres and ultimately back into the ground from where it originated.

Undertaking house inspections where the roof cladding is asbestos corrugated; often in the roof void a fine white powder/dust is sighted below and on the sides of the purlins; this is asbestos fibre! The movement between the asbestos sheet and the purlin has caused the fibre release via friction. The fibre release is into the internal environment! This is where we strongly recommend and emphasise to have the roof cladding removed and the roof void decontaminated by qualified asbestos removers.

An existing roof clad with asbestos may have been overlaid with another roof cladding. If this is the case then the problem has only been hidden and not resolved!

Decorative plaster ceilings (Glamertex, Whisper, Artex or similar) very common in the 1960’s 70’s up until early 1980’s. The plaster matrix would have up to 5% asbestos content and averaged to around 3%. Being bound with the plaster the likely hood of initial fibre release would be minimal. It would still pay to have the ceiling plaster sampled and sent off to Capital Environment Services for testing. Keep the ceiling painted especially around the perimeter of the ceiling / wall junction.

Any questions please feel free to e mail: This email address is being protected from spambots. You need JavaScript enabled to view it.

1* 2* ASBESTOS: A pilot study to determine if asbestos fibre is released into the environment from corrugated asbestos roofing using the medium of rainwater.

Designed by The Design Company Ltd.